Back to Mental Wellbeing

Let’s come together to:

Click here for key resources for those bereaved or affected by suicide.

We need to talk about suicide (and use the right language)

Imagine the hurt being linked to a crime, especially when feeling vulnerable.  In 1961 Suicide was de-criminalised in the UK, and yet too often, we hear the expression ‘committed suicide’ which implies a crime has been committed. Let’s take the word ‘committed’ out of our conversation when talking about suicide, so we can reduce the guilt felt by people having suicidal thoughts, so they are more able to open up about how they really feel, and to get them support as soon as possible. Let’s use different language when there’s been a ‘death by suicide’ or a ‘completed suicide’. Local and national Mental Health and Suicide related support can be found here. Suicide is Preventable!


If an adult or child is experiencing severe mental distress you can make an emergency appointment with their GP or go to A&E.  If you are worried someone is at risk of harming themselves or others call 999.

Let’s get people to talk about mental health and suicide so that #Itsokaytotalk about how we’re feeling and it’s #OK2ASK how they are feeling.  If you’re not sure someone is OK remember, it’s OK to #AskTwice to make sure.

Mersey care Click Here  24/7 Crisis Line - free to call from mobile and landlines (the service is available for all ages incl. Children and Young People) 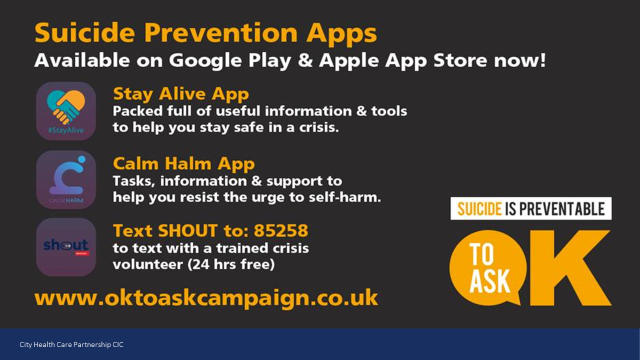